Signing off from Vegas

It wasn't a very post filled trip, I know. But with the writing work good, that's nice for the pocketbook.

They're in the Amazon Room now playing for $8 million, four handed for awhile now. I float in there now and then to check the progress, but mostly keep up with it on PokerNews.

It wasn't quite the summer of '06, but I enjoyed the trip. Only broke even playing poker in town (but have won nearly $2K online just sitting around in the media room the last couple of days). Just couldn't win the coinflips or otherwise might be up $5K or more.

Hopefully, the work I've done here will pay off when I return with my continued writing for PokerWorks and Rounder. I'm also feeling strongly about turning more seriously toward tournament poker. Even though I haven't been very lucky on this trip, I feel I'm making good reads and having the courage to act on them, whether it's calling a big bluff on the river or calling an all in with 4-4 when I am convinced my opponent has two high cards. I'll be working on building a bankroll for the FTOPS and WCOOP events. Maybe I can make some noise.

But first and foremost, it's wedding planning. Amy and I get married in just over a month and we have to pick out the cake and flowers. I am very excited about the future and spending my life with her. She also puts up with my poker playing, which most normal people would think is pretty crazy. Amy's a keeper.

But now I must pack up and drive back to Binion's to catch six hours sleep. My flight's at 8:30 in the morning.

Good night from Vegas.
Posted by TuscaloosaJohnny at 12:52 AM 1 comment: 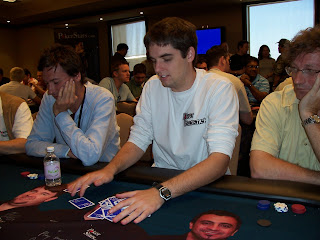 Steven Paul-Ambrose dealt at my table. I busted with A-K vs. 7-7 on a K-9-7 flop. Vanessa Rousso also busted on the hand when she called all in on a flush draw. (High blind structure = crapshoot = much gambling). I got a very nice backpack full of PS swag for my troubles.

Posted by TuscaloosaJohnny at 6:58 PM No comments: 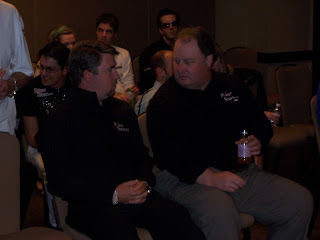 Moneymaker and Raymer sit in the front row of a PokerStars media event I attended Tuesday.

Posted by TuscaloosaJohnny at 6:57 PM No comments: 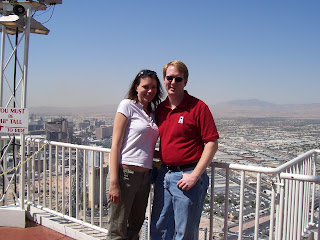 On top of the stratosphere prior to riding Big Shot.

Posted by TuscaloosaJohnny at 6:56 PM No comments: 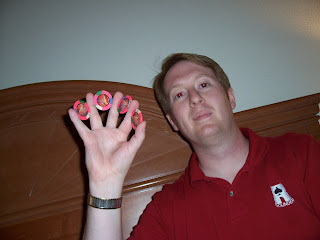 Posted by TuscaloosaJohnny at 6:54 PM No comments: 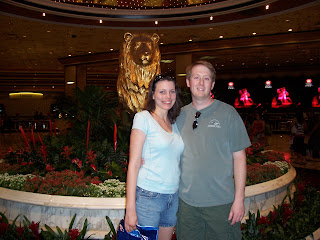 Amy and me safely in front of the not so real lion at MGM.

Posted by TuscaloosaJohnny at 6:53 PM No comments: 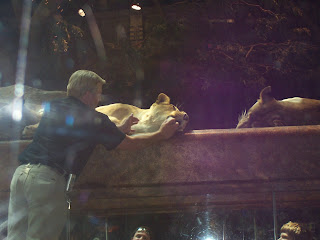 Posted by TuscaloosaJohnny at 6:52 PM No comments: 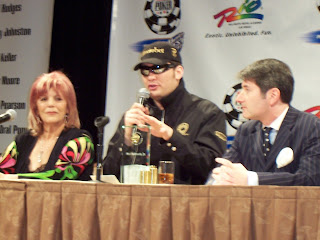 Barbara Enright and Phil Hellmuth were inducted into the Poker Hall of Fame at the press conference. Enright was at my table briefly in the $150 Limit Hold'em event at the Binion's Poker Classic in which I finished 10th.

Posted by TuscaloosaJohnny at 6:48 PM No comments: 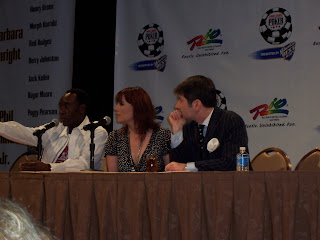 Posted by TuscaloosaJohnny at 6:47 PM No comments: 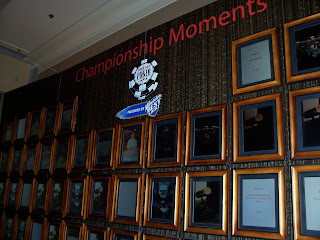 This display near the WSOP entrance is an epileptic's worst nightmare. You would just have to see it in action to understand.

Posted by TuscaloosaJohnny at 6:45 PM No comments:

Sorry for the dearth of posts

Usually, I post almost daily during my Vegas adventures, but this year I just haven't had the time. This is a good thing, though, because it means my work has kept me busy, which in turn means I actually get paid for the stuff I do on here for free. You can read most of my WSOP reporting at www.pokerworks.com.

I've also spent the better part of the past week with my friend Brian and Heather and then Amy, when she came for the weekend. So I didn't write about or play poker for several days.

I did participate in the media/celebrity event on the 5th, which this year was the all media/no celebrity tournament since any celebrities playing that day participated in the Ante Up for Africa charity tournament. That was a real clusterfuck too. I wanted to cover it, but with rail birds ten deep and media prohibited from inside the ropes that proved pretty well impossible.

It was fun showing Amy around town. We rode the gondolas, we rode the Manhattan Express, we stayed at the Stratosphere over the weekend and rode the Big Shot. It reminded me a bit of my first trip here in 2001. Now, when I see people standing in my way looking at the light show on Fremont Street, I mutter "tourists" under my breath as I dodge them on the way to a poker game or buffet. It was nice to actually be a tourist again for a few days.

Now I need to try to get into some of these $500 or $1,000 second-chance tournaments they are running at the WSOP during the last week. It's my last chance at a big score since I didn't cash big or try to win a main event seat. I must admit I am very envious of the players still in it. There's no ride in poker like it.

OK, here's some photos for your enjoyment.
Posted by TuscaloosaJohnny at 6:29 PM No comments: 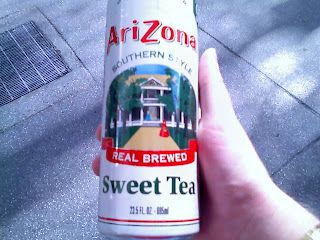 I've been so busy the past week that I have found little time for blog posting and such. I've played quite a few tournaments, and though I feel I've played well, I've had little success in them. I finished 10th in the $150 limit hold'em event at Binion's last night, making only about a $250 profit in the process and just bubbling the final table. I didn't get one of those cool Final Table card covers they are handing out, which pissed me off. That's my only cash in a tournament so far, after having played 5 or 6 of them. I'm still up for the trip, however, since I've yet to have a losing session in a NLHE cash game and I chopped 2 of 4 satellites I've played at the WSOP. (I'll probably play a lot more after the main event begins to try to get into some of the second chance $500 events.)

Amy is flying in Friday night and I can't wait to see her. I've got to find some Cirque de Soleil tickets to one of the shows. It's her birthday Sunday and I want to treat her to the best one ever.

My friends Brian and Heather are flying in this evening and they will be here for several days. (They are the ones who I went to The Price is Right with.)

So other than a few things like the media/celebrity tournament and Ante Up for Africa tournaments on Thursday I won't be playing or writing about poker much in the next week.

Check http://www.pokerworks.com/ when it's working to read some of my posts. I think you will find the Bickering at Binion's article pretty entertaining. Dan Michalski, who still fondly remembers 2006 whenever he and I drink together, is writing some good stuff, as is the man himself, Craig Cunningham.

I've run into just about all of the writers I worked with last year, but this year just isn't the same. It seems everyone's got bigger gigs which keeps them all busier than before. There have been fewer dinners and drinks last year. (Or maybe I'm just not invited.) I long for 2006 too Dan.

Hey, at least I found a can of sweet tea.

Posted by TuscaloosaJohnny at 3:06 PM No comments: