"You have such a cool job"

"Now I can tell people I heard James Woods in my kitchen." -- Amy

At least I can impress my wife. The great thing about working with Rounder is the chance to chat with some "famous" people, however you might interpret the term. Jerry Yang called me the other day to tell me about some tournaments at Lake Elsinore in California that are going to be called the Jerry Yang invitational. (Lake Elsinore Hotel and Casino paid his travel expenses at the WSOP last year.) And this weekend I chatted with James Woods as he drove cross country, back to Los Angeles presumably to begin filming new episodes of "Shark." We had some cellphone difficulties as he drove through Ohio so the conversation took place during three calls over two days. I must say it was surreal to talk to James Woods on the same day as the Oscars. The 60-year-old actor has been twice nominated in his career, for Ghosts of Mississippi, and, I think, Salvador.

We're profiling Woods, who I must say is a very nice guy, in our next issue. I share here with you a transcript of part of the interview I will not be using in my article, in which Woods talks about aspirations. We were discussing tournaments and he talked about how you must decide whether you are in it just to cash or you really are willing to play to win. He then began relating that to acting. Here in his words:

“People say you know what I want in life? I say you don’t have to tell me. I know what you want. They go, what do you mean? How do you know that? I say, what you got that’s what you want. If you wanted something else you’d f---ing do it. But, you know, you’re settling with what you’ve got.

I’m not talking about being an astronaut or wanting to be the President of the United States. But by and large, if they say I want to be an actor...get out there and get a f---ing job, you know? 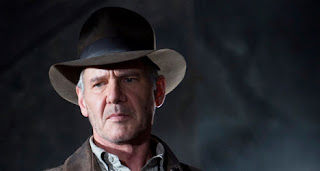 I love these people who freeze frame these things and dissect them for every bit of information possible. That way nerds like me don't have to and we can sit back and enjoy the fruits of their labor. Follow the link above to go to Deadbolt.com, where writer Tom Burns examines the Indiana Jones 4 trailer microscopically for potential plot details.

Even more interesting is the section of the site that looks at potential Indiana Jones scripts, including this nugget from Chris Columbus:

Yes, Columbus can write action, but he writes pure-bred CRAZY action, crazy on a level that's appropriate for the Mummy movies, but not Indiana Jones. There IS a sequence where Indy rides a rhino while chasing a tank, and there's an extended battle at the end with Indy organizing an army of African pygmies and super-smart gorillas to battle an army of Nazis Ewok-style. No fooling, there's a bit where the gorilla starts driving a tank. Plus it opens with a bizarre sequence where Indy is fighting a banshee in a Scottish castle and it has NO relevance to the rest of the story (just something that happened on his vacation). He's not a Ghostbuster or Fox Mulder, he's an archeologist!

Here's the link to that:

Technically 19, and honestly after "The Last Crusade" I figured Indiana Jones was going to ride off into the sunset figuratively and literally (as in the movie), but then there were the rumblings of another Indiana Jones movie. George Lucas made us fans salivate as he said he wouldn't work on another Jones movie until he was done with the Star Wars prequels...and then there were numerous script re-writes and other delays. Finally, in three months we get our fourth (and presumably final) Indiana Jones movie. Here's the trailer if you have yet to see it...


Posted by TuscaloosaJohnny at 9:16 AM No comments:

Yep, I've been home for two weeks and have yet to post on the second leg of my trip. I'm so lazy I'm not even going to do it today. But it was interesting. From sharing a cab with Hoyt Corkins and John Phan, to sharing an elevator with a drunken Gavin Smith to shooting craps with T.J. Cloutier and sharing vegetables with Freddy Deeb, it was certainly a noteworthy trip and I will write it up soon. Maybe tomorrow, but I wouldn't hold my own breath for that.

I've been hooked on the show since its premiere. While it has had its ebbs and flows, in general "Lost" has set a high bar for writing and storytelling that few other, if any, nightime serials can match. The season finale in May with its surprise "flash forward" had us "Lost" fans salivating for this year's season four premiere. And last week's first episode did not disappoint. We not know that six people from Oceanic Flight 815 make it off the island alive. We know three of them are Jack, Kate and Hurley. I believe tonight we find out who the other three are.

The writers often seem to introduce more mysteries each week than they answer, and while they might seem frustrating to some, I enjoy the building suspense. Each episode is like a Christmas present I get to unwrap each week.


Click the headline to go to a site I enjoy reading that is written by a guy who is closely watching each episode to attempt to unravel the mysteries of the island.
Posted by TuscaloosaJohnny at 3:40 PM No comments: