As July passes into the ether (and since I haven’t posted since my immediate trip report), I thought it time to reflect more on the Vegas trip since I don’t exactly play a lot of poker these days.

In the spirit of Buzzfeed, which these days is all the…err…buzz, here’s five takeaways from my two days in Vegas.

1.       Yes, I mentioned it before, I think, but must emphasize again: where was all this Omaha Hi-Lo action when I spent weeks running around Vegas? Is this backlash against Hold’em or folks wanting to play Omaha without the swings of PLO? I’m not sure what the impetus is, but for some reason my favorite poker game is white hot in Vegas, at least this summer. Now granted, back in 2005, 2006, 2007 and 2008 when I was in Vegas for weeks at a time, I was not the O8 player I am today, so even if the game was big then I might have got my hat handed to me.

2.       Is Murphy’s law at play here in the fact that (speaking of white hot) I’ve been on fire at poker, but now am in a place where I can’t play much of it? Unfortunately, my laptop with my month-to-month results is on the fritz and unaccessible, but I can tell you with fair estimation that I made around $10,000 the first six months, plus first week of July, at the poker tables. My $2K in two days result in Vegas only reiterated how confident I feel at the tables.

3.       Caesars seems to have its act together with the World Series of Poker. They’ve been using the same set-up for three years now, I believe, with the main tournament action in the Amazon ballroom and most everything else in Brasilia. Brasilia has the bright lights while Amazon is much more dark, adding to the intensity. I like that. And to think, for the first couple of years, ALL of the action was in Amazon. (Sort of like thinking in amazement in 2005 that the WSOP was once contained in tiny Binion’s.)

4.       What are they doing to Fremont Street? They’re building this giant zip line to cover the entire four blocks under the canopy. What an eyesore. On the bright side, I saw fewer costumed characters out and about, although I noticed more panhandlers. Also, Fremont East, once the home of closed-up storefronts, seems to be booming.


5.       I only got a taste of the Strip so I hope Amy and I get to return in November for that couples’ trip we’ve been discussing. I ought to have us some sweet comps (free rooms, meals) through MyVegas when we’re ready to go.
Posted by TuscaloosaJohnny at 5:26 PM No comments:

A final table, if not a win

Sometimes you play your best, but the cards conspire against you.

That proved to be my saving grace in Vegas on the Fourth of July in what was a profitable, if not spectacularly successful, trip.

But 2K in two days? I’m not complaining.

I flew out after work on July 2, leaving at 4 p.m. for Birmingham for the 6:40 p.m. flight. Unfortunately, an already long day got longer when the flight from Chicago to Vegas was delayed about an hour. We reached the McCarron tarmac about 12:30 a.m. PT, or 2:30 a.m. in my neck of the woods.

I made it down to Four Queens and crashed in Ted’s room, but had to get up about 6 a.m. to start my half day at work. I found Internet at the McDonald’s at Plaza and edited Watchdog stories for four hours before we knocked off and I entered the $125 Golden Nugget tourney, for which I had won a freeroll seat.

Not much doing in the first few levels there, until several players limped to my BB and I knuckled with 6-8.

I checked, saw a bet, a raise and I pushed all in. Initial bettor folded and the raiser called with 4-4. Did he fill up? Heck no, he hit two more hearts to four flush me with the 4h. Dirty.

On the bright side, that beat allowed me to head down the Strip and over to the Rio, which I wouldn’t have gotten a chance to do otherwise on this short trip.

I wondered down to the Venetian and met up with my pal Stephen Ladowski, who chauffeured me over to the Rio, where we grabbed a quick bite and then headed to the WSOP area. I sat in a 10-20 O8 game with half kill, and scored $500 in a few hours “work.”

Why couldn’t they have played this much O8 when I was hanging around Vegas for weeks at a time during the WSOP in past years? I’ve noticed from the Bravo app that the 8-16 and 10-20 O8 games are healthy these days at the Rio and Venetian. I think I’d have cleaned up if these were popular back then.

I cabbed it back to the Golden Nugget to finally sleep in my comped room, again for only four hours or so. (A lack of sleep is a recurring theme – I got about 12 to 14 hours in three days)

I knew I played well on the 3rd and was brimming with confidence for the$600 GN tournament on the 4th (another comped entry). I started fast, boosting my 15K stack to 55K slowly, before I nearly came crashing down.

Player on the button raised my 400 BB to 1,200, SB called, I looked down at AA and made it 3,600. The button folded and the SB shoved in for about 20K. He turned over AcQx and said he thought I was making the ol’ squeeze play. I don’t really mind his play here, and not because I held aces – it seemed like a pretty good move.

Anyway, you know the drill: the flop was Qc3c4c and he hits the fourth club on the river.

It’s uncanny that as few $500 to $600 tournies as I have played over the years – no more than 10 to 15 – that twice I have had AA cracked by AQ on a four flush (the other was a WSOP Circuit event in New Orleans, which eliminated me with about three quarters of the field gone). It’s just a sick way to lose a hand. I’d rather my aces lose to a set.

So they knocked me down to about 30K when I could have had 80K. I tried to maintain my composure since it’s easy to go on tilt. I got a little squirrely and proceeded to dust off about 10K before break.

Now back at an even keel, I pulled a risky maneuver at the 400/800 level by moving 12K over the top of a 2,400 raise with 22. The initial raise had opened a lot of pots so I figured I could get a fold. Well, I did from him, but the button called me. I was happy when he turned over AQ. The flop was finally gin for me: 2-7-2. I doubled, and button whined for minutes, if not hours (he was one of THOSE types). 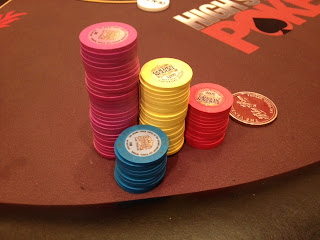 I chipped up, and made the final table, where I proceeded to get almost immediately coolered. I raised with TT, get it all in on a 9-T-J flop and was up against Q-K. I did not fill up, busting ninth and earning about $1,300.

Notice that this was almost exactly the opposite situation of what happened to me the day before when I busted. The difference being that I lost both times.

Still, enough bitching. I managed to net $1,940 over two days in Vegas, with a comped room on top of it. Including my free flight I got with Southwest Rapids Reward points, I spent about $150 all told getting to Vegas and back home.

I felt confident from my recent successes in St. Louis, played well and felt pretty validated by my results. It would have been easy to lose my head after getting my aces cracked, but I did persevere.

The competition was no slouch either, as I played with two-time WSOP bracelet winner Howard “Tahoe” Andrew, noted poker writer Chris “Fox” Wallace and recent WSOP Circuit points leader Rex Clinkscales.
I’m not sure how Andrew finished, but Wallace chopped first with a fellow Minnesotan.

There was an epic situation involving a drunk who got not only tossed from the tournament, but arrested and led out of the GN in handcuffs, but I will save that for the next post…

Posted by TuscaloosaJohnny at 12:44 PM No comments:

Just a quick note to post that I have decided to go to Vegas for a few days, flying out tonight after work and playing those two tournies at the Golden Nugget ($125 on Wednesday and $600 on Thursday) before flying back Friday afternoon.

Hard to pass up two free shots at some very solid cash.

Updates to come.
Posted by TuscaloosaJohnny at 3:01 PM 1 comment: