Interview with "Boston" Rob from Survivor 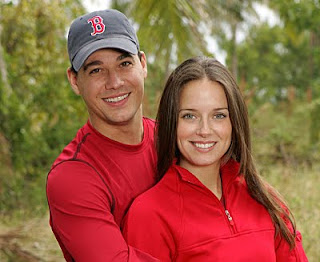 The following is a Q & A I did for Rounder at the Beau Rivage in 2008. I caught "Boston" Rob Mariano walking out of the casino after busting out of the main event of the Gulf Coast Poker Championship and he granted me a short interview. This was to be for the Celebrity Q & A we did each issue, but it never made it in.

Since he's back on Survivor this season for the "All-Star" game of "Heroes vs. Villains" I figured I would take this one out of the vault.

In 2002, “Boston Rob” Mariano first made his mark on television as a contestant on “Survivor: Marquesas”, where his scheming ways made him a target for the other competitors. Mariano’s popularity convinced producers to bring him back for “Survivor: All-Stars” where he finished runner-up to Amber Brkich, with whom he fell in love on the show and asked to marry him on that season’s reunion show. Since then Mariano has appeared on a number of reality shows, including two seasons of “The Amazing Race” with Brkich. The married couple now lives in Pensacola, Fla., and the 33-year-old Mariano is often found on the poker tournament circuit. We caught up with him after he busted out of Day 2 of the main event of the Southern Poker Championship at the Beau Rivage in Biloxi.

Tell us how you first got into poker.

I’ve been playing poker for about five years when the whole Moneymaker thing got me interested in watching the World Series, and I was fortunate enough to be invited to go out and play in a charity event down in Hawaii for Bodog. It was after I played the main event of the World Series for the first time after I was on “Survivor.” I met Josh Arieh and Daniel Negreanu, became friends with them, and subsequently Erick Lindgren and Gavin Smith, and they really got me into it more.

You’ve played tournaments here at the Beau Rivage in Biloxi before. What brings you to Biloxi for poker?

I’m living in Florida now so I’m playing a lot more on the Gulf Coast and in New Orleans. We also have a home game. We play about three days a week, and then I have a sister who lives in Vegas so I go to Vegas about six or seven times a year and play out there. I try to play the big tournaments when they come to town. I was fortunate I won a last-minute 1K satellite to get into the main event, and I did pretty good yesterday, but I had a bunch of bad beats today. I ran two kings into ace-deuce offsuit and he hit an ace on the river. I flopped top two and a guy went runner runner for a straight. I’ve been playing solid, but I took a bunch of beats along the way. The last hand I just went out on I had two eights in first position. My chips were really low. I popped it to 4,300 with the blinds at 800-1,600 and Barry Greenstein came over the top, which he is going to come over the top a lot with a wide range of hands because I had been playing so tight and don’t have a lot of chips. Unfortunately for me he woke up with two kings in the big blind and that was it for me.

What tournaments do you usually play in Las Vegas?

I play the World Series every year, not necessarily the main event, but I play some of the smaller ones. I play at the Bellagio a lot. I like to play cash too. I play low-limit cash games like $2-$5, sometimes $5-$10.

No, not too much. She won a charity event one time, though, and at the L.A. Poker Classic a couple of years ago she made it to Day 2 with me so she plays a little bit, but not seriously.

What do you think of the recent seasons of “Survivor”? Do you think it is still interesting?

Yeah, we still watch all the time. We watched this last one that the guy with the bow tie won [Bob Crowley]. I think it has gotten a little bit predictable. They need to re-invent the game a little bit. I can’t believe they’re still doing and falling for the same stuff over and over and over again. It’s like you can get raised so many times from the button before you have to look them up, but they seem to be complacent.

What else have you been up to these days?

I just finished hosting a reality blackjack show at the Windstar Casino out in Oklahoma. I just did that last fall, and took a little time off for myself around the holidays.
Posted by TuscaloosaJohnny at 4:44 PM 3 comments: