The judge hearing the case against the Utah banker accused of processing payments for Full Tilt and PokerStars put off the plea bargain that U.S. attorneys had negotiated, and is making the prosecution explain why they want to avoid trial.

Assistant U.S. Attorney Arlo Devlin-Brown said the deal given Campos was also an acknowledgement that there were trial risks, especially after people working on behalf of the gambling outlets had given Campos legal opinions suggesting that it might not be illegal to process the money for Internet gambling companies.

"There would be a risk that a jury on that basis could have a problem," Devlin-Brown said.

He also said the bulk of the case brought by the government concentrated on people who duped U.S. banking institutions into accepting gambling proceeds by hiding them behind sham companies. Campos, he said, came at the "tail end of the conspiracy."

Sounds like they're scared of setting a precedent that might not go in their favor. Lawyers and lawmakers are scared of what would happen when the sham anti-online poker laws were put to the test in court, don't you think?
Posted by TuscaloosaJohnny at 9:12 AM No comments:

Money's relative in poker and journalism

I occasionally have interesting discussions with co-workers about my previous life.

Most people who have spent their entire lives in the cubicle farm can't fathom the lifestyle of poker players, which from the outside appears much more lavish than reality.

For example, I was joking the other day about not having a $5 in my wallet to pay my entry in a NCAA tournament bracket pool.

"I used to walk around with a wallet full of C-notes," I said.

"Then why did you stop doing what you were doing and come here?" was the reply of one person.

I haven't really tried to explain the whole sordid issue to him. (Got a few hours?) But put simply, my exit from poker playing/writing and re-entry into newspaper journalism was out of my control -- and largely in control of Congress and the DOJ.

The editor probably thought I was indicating a certain richness by my comment. What he doesn't understand is that money is just a tool of the trade. If you DON'T walk around with a wallet full of C-notes, you can't get in the game, or at least I haven't found a poker game that takes checks or credit cards.

The volatility of poker also confounds outsiders. I've been asked what's the most I've won and lost in a single day. For cash games, the answer to both questions is about $2,000. For tournaments, it's probably $4,500 in a single day. (Of course, I cashed in the WSOP main, but that was three days of play with several days of breaking in between).

You share those numbers with a guy who makes about $600 to $700 a week and it seems astounding, but what I try to explain is that you might win $600 one day and lose $300 the next. Over two days you've made $150 per day. Poker playing is a roller coaster that -- if you're good -- you'll come out similarly to what you would have made if you sat in that cubicle farm all day.
Posted by TuscaloosaJohnny at 9:29 PM No comments:

A few news and notes on the race for the first state offering intrastate online poker:

Iowa -- The House there approved a bill for online poker, but it was a non-starter in the Senate, whose members seemed unprepared to even discuss the issue. See this story. That's our elected leaders for ya. Poker seems unlikely in the Hawkeye state this year.

Nevada -- Although my understanding was that online poker there would only go if it was federally legislated, it seems the DOJ ruling is allowing Nevada to move ahead. Licenses continue to be granted, and experts expect games to be running in the Silver State before the end of 2012.

New Jersey -- There's still talk of legislation passing this year. If people don't have to vote on legalizing online poker, as some argue must be done in accordance with the state law that allowed Atlantic City gambling in the first place, N.J. could have poker in 2012 too.
Posted by TuscaloosaJohnny at 8:58 AM 1 comment:

Amy says my blog posts lately have been lackluster, especially the one about Big Deal. If so, I apologize.

For some interaction, I've added a new poll...after only TWO years of the last one, no less!

I want to know which state or area you think will be the first to have intrastate online poker up and running (this year, I hope.)
Posted by TuscaloosaJohnny at 9:02 AM No comments:

Sorry, forgot the source I copied and pasted this from, but the latest news from NJ is that any legislation concerning online poker would likely be voted on by residents. Essentially, people there would vote on an amendment to the state constitution because the state's charter only allows gambling in Atlantic City:

The state constitution prohibits gaming anywhere beyond Atlantic City.
While there is a technical rationale for saying that having the internet servers located in Atlantic City is sufficient, it’s also true that if a Jersey resident is betting in their living room 100 miles away, that doesn’t “feel” like an Atlantic City bet. So someone might try to make the latter case in court, even if Governor Christie’s Attorney General’s office doesn’t insist on a referendum come November. 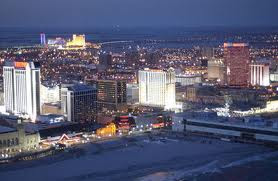 Posted by TuscaloosaJohnny at 9:08 AM No comments:

I may have mentioned before that I often do a Google news search for "online poker" to see what people are writing about. Not a lot of legislative movement in the states this week, but this interesting article is making the rounds.

I've seen it in a number of publications, which seem to be a network of alternative weeklies in bigger cities across the United States. I think it lays out the situation well, and will perhaps get people thinking and talking about online poker legalization.
Posted by TuscaloosaJohnny at 9:11 AM No comments: