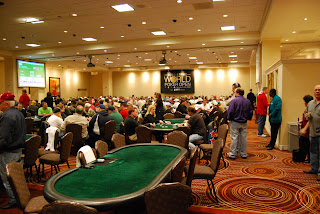 I've been rather lax in the blogging this past week and a half as work with Rounder magazine has keep me on my toes. We're really pushing our presence here, with Rounder Girl visits and autograph sessions, merchandise sales and tournament coverage, of course.

The best part for me is that unlike previous years I get to stay for free. As Lou Esposito told me in New Orleans when I interviewed him in November, he likes "to keep the cost of poker down." Obviously, staying free makes it much easier to show a profit during tournament travels, and since I appear to be heading down the road of making my living writing about poker and playing it for the forseeable future, I need to keep the cost of poker down myself.

Little has changed here in Tunica. You've still got your World Poker Open at the Gold Strike and your World Series of Poker Circuit event at the Grand Casino and your degenerates who are always around trying to make a buck... 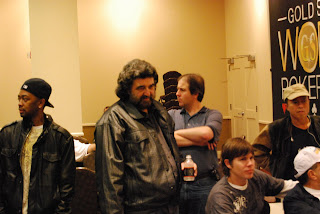 ...like me. For once, I've actually made a few bucks. Let me backtrack and tell you that 2007 was my worst year ever at poker since I've played it seriously. Granted, when I was in school in the spring I wasn't playing a lot so I must take that into consideration. In late summer and fall I seemed to be in some odd life tilt and was playing poker poorly in the process. The end result was a $10,500 or so win for the year. That's less than I made the last two years I worked at the newspaper when I toiled full time and played poker on the side.

I have this new goal of just trying to win $100 a day on weekdays ($150 on Mondays when I get my rakeback from World Poker Exchange), which comes out to almost $30,000 a year. If I can do that and continue to grow my freelance writing business I can live comfortably and stress free. I realized during my life/poker tilt slide last year that I was pressing too much, trying to win wheelbarrows full of money at once. Poker is a marathon in which slow and steady can win the race.

I think that's why I've come to be known as the Kinnish of Tuscaloosa. At least, that's what a couple of the younger players called me recently in a local underground game (one of them, Rob Berryman, was the 33rd place finisher in the 2006 main event). It seems I'm known to be a player who would rather make the steady money than to risk a lot of his bankroll for the big score, and really that's ok with me. I've seen too many people go broke that way. I have a family to support.

So, anyway, back to the good news. I came into Tunica this month with a mission. In previous trips to big tournament events, I've usually done well playing satellites, and for some reason I tend to stray away from them and only play a handful during each trip (sometimes the lines are too long, sometimes I don't have a big enough bankroll with me, etc.) This January I came with the intention of playing a lot of satellites. The first day here at the Gold Strike I chopped 3 out of 5 satellites, and with some last longer money included, I won over $1,100 the first day.

The second day I played the first event of the 2008 WPO, a $340 NLHE tournament. Unfortunately, I busted quickly when a guy limp re-raised my both times I raised from late position. The first time I folded jacks, but the second time I had A-K and decided to push in on him. He called and turned over queens and won the race. I guess he wasn't stealing after all.

My misfortune turned to fortune when I walked over to the Horseshoe and played their daily tournament, a $65 plus $40 rebuys tournament. I worked my way to the final table. One guy had a mountain of chips, but I started catching hands and I proposed a chop (which would have been about $2,300 each) when we got four handed and were pretty even in chips. Mr. Mountain was still slightly ahead of everyone and declined, so I think that the rest of us were gunning for him. On the every next hand, the player in the small blind, who tended to show good cards when he raised, pushed all in and Mountain called for about 70 percent of his stack with K-9. Small blind showed K-K. Who knows what Mountain was thinking? I finished him off two hands later when he went all in and I called dark against his short stack. He had A-5 and I had 3-5. Karma is a bitch, sometimes. Yes, I rivered a 3.

What happened next was a lession in Bad Dealmaking 101. One of the other two guys said "Let's chop second and give him first." That's right, they just GAVE it to me. They didn't ask me to give up some money. They just gave me money for the best I could possibly do, and I only had about 2/3 to 3/4 of the chips in play. Eschewing the gift horse's mouth, I took the $4,200 and went on my merry way.

I played a couple of more tournaments, including the $500 O/8 at the Grand, with no luck and returned home for a couple of days to see Amy with an additional $4K in my pocket for the first part of my Tunica trip, and a $5.5K start to the month after two weeks with online wins included. So I have already won half as much as I did the last 365 days in the most recent 14 days. Isn't poker a crazy game?
Posted by TuscaloosaJohnny at 4:11 PM No comments:

I hope everyone had a happy new year. Both Amy and I were sick, and other than a quick trip to the Cypress Inn (a restaurant, despite the odd name) for dinner, we stayed in and watched Dick Clark. It's sad to see the state "America's oldest teenager" is in after his stroke, but sweet to see how sincere he was in wishing everyone best luck in the coming year, not to mention the midnight kiss from his wife. Touching.

Also caught the record motorcycle jump in the parking lot of the Rio. They make those things seem so suspenseful, but I'm sure they know how high they have to build the ramp and how fast he needs to accelerate to ensure the jump is successful, so in a sense the show is smoke and mirrors.

This morning I've got my cup of coffess by my side as I watch the sun rise. I'm about to pack up for Tunica. I was just realizing that other than Vegas for the WSOP, Tunica is the only place I have traveled to annually since I began playing poker. My annual trip actually predates my trips to the WSOP since I think I've gone every year since 2003. Who can blame me, or my local co-horts? This month sees two major tournament series a mere four hours from home. This year, thanks to my work with Rounder, I get to stay free. While before I've had to pay for all of my expemses as a poker player, I think I could get used to this having things paid for me to go write gig.
Posted by TuscaloosaJohnny at 6:30 AM No comments: