Sheldon Adelson, chairman and CEO of Las Vegas Sands, parent company of The Venetian and Palazzo, weighed in on Forbes last week, calling for a reworking of the Wire Act or a new federal law banning all online gambling.

It’s long been known that this hypocrite, and what one commenter called a “relic,” has been adamantly against online poker (and other forms of Internet wagering).

But no, I’m not a hypocrite, Aldeson explains to us, by stating his concerns are as a “father, grandfather, citizen and patriot of this great country…” and later notes that the majority of his “casino profits come from Asia.”

Hey Mr. Patriot, how many Americans are you employing in Macau?

The fatherly Adelson uses the opponents’ standard line of reasoning that children will find a way to place online wagers and that a desperate, debt-riddled society will fall deeper in the hole trying to fill that inside straight.

Will some children manage to sneak in a few bets? Sure. Parents can’t control them every waking moment. But how many kids now view pornographic pictures and violent films online now? Hordes. The Internet is in some ways a wasteland of morass. It’s a Pandora’s box that has been opened, and there’s no closing it. And let’s not forget that people can now play poker, blackjack, slots and much more online in a very unregulated environment. If Adelson really wants to protect the people, including the children, he should push for regulation.

As for that debt-riddled public? A recent report projects U.S. credit-card debt will increase $47 billion this year. Online poker isn’t causing that.

I enjoyed the rebuttal by user Henry428:

One can read through the lines and your attempt to associate being a good father and loyal citizen to the anti-online stance. That’s a little disingenuous. I fought in two wars for my country and feel just as strongly that my government has its place…and its not regulating what it’s citizens can do over the internet, especially when they are causing harm to no one else. Washington doesn’t need to save its citizens from themselves. We need government banning less activities, not more. Don’t ban me from drinking 22 oz. soda and don’t force me to drive 30 minutes to a casino when I can do the same activity online at home.


Adelson promotes his logic citing the jobs that he claims would be lost by land-based casinos. Henry428 notes that it’s possible there could be fewer jobs, but the ones created by online gambling would be for higher-paying technical jobs.
Henry428 writes:

Fewer bank tellers are needed due to the rise of ATM’s yet we don’t outlaw ATM’s.

I’m not convinced we would even see a net decrease in casino-industry employment. Witness the first poker boom created by the rise of online poker and the Moneymaker effect: sites like PokerStars and Full Tilt Poker sent thousands of players to land-based casinos to play in the World Series of Poker, World Poker Tour and other events, and new poker rooms popped up everywhere. Since the PokerStars-sponsored Moneymaker won the WSOP in 2003 the event has grown tremendously.
Already, in Nevada, we’re seeing properties such as Golden Nugget and Stratosphere use their free-play sites to promote their Las Vegas-based casinos by giving away free rooms, meals and show tickets. When others, like Treasure Island (with 888) and Caesars are up and running, I would expect them to do the same. Online poker will allow casinos to market their brick-and-mortar properties to the masses. Who wants to sit in front of their computers when they can experience the real thing? 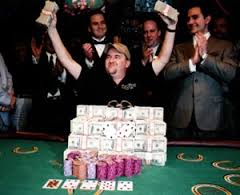 Adelson talks about how “a person makes an effort to get dressed, join some friends and head to the local casinos for a night of entertainment” as a point of how their behavior can be observed “and ultimately managed by security and other staff if needed.” Realistically, unless someone is so drunk they can’t sit on a slot stool or they are causing a disturbance when does security staff ever stop a person from gambling because they somehow know they’re in over their head? Please, Mr. Adelson.
Everything he argues stands against standard free market principles (and one wonder how many taxpayer subsidies Adelson may have gotten to build some of his casinos). Stop this old-school nonsense, and let the people live their lives.
Nolan Dalla, the longtime poker writer and WSOP mouthpiece, weighed in. I’ll leave you with his post:

Sheldon Adelson is a pathetic embarrassment to himself and the industry he proports to support. He’s a stone ager thinker whether it comes to donating $40 million to Newt Gingrich, blindly supporting Israeli colonialism on the West Bank, or protecting his own self interests as a casino owner. Liar and hypocrite, Sheldon Adelson has nothing to contribute to this important issue.

Posted by TuscaloosaJohnny at 9:50 AM 2 comments:

While he may not have been the flag-bearer of integrity (see his alleged pay for sponsorship efforts), Nevada Sen. Harry Reid did seem to have a good grasp on which the way the online poker legislation wind was blowing.

Not at all now or in the future, in his estimation.

“I felt for several months now that I don’t see any movement on this,” he told the Las Vegas Sun. “I don’t see anything happening.”

Reid made those comments in light of a bill filed by New York Rep. Peter King in the U.S. House this week that tries to federally legalize most forms of online gambling.

Poker has a shot, but if you lump it in with the likes of blackjack and slots then you have some seriously lame-duck legislation.

“We’re still trying, but I’m not really confident we can get something done,” Reid said.

The move away from Congress and toward state-by-state regulation has seemed to be the way the legalization effort has been moving for some time now. Consider that the Poker Players Alliance has already pretty much given up on Capitol Hill and focused its efforts on state regulation.

On the bright side, the game has not only been legalized in three states, but is also already running in Nevada – including free play for non-Nevadans (thank you very much Golden Nugget.)

Those of us in the ultra-conservative states, ahem, can get out jollies with free play on stalwarts like Poker Stars (and its excellent bonus codes) and Full Tilt Poker.

Me, I still need to find a good underground game. There’s got to be one around here somewhere. Bueller?


Posted by TuscaloosaJohnny at 2:32 PM No comments:

I haven’t written in a while because life away from the tables has kept me quite busy.

For starters, I’m writing today from my new home, and my hometown, Cullman, Alabama.

Less than a month ago, I got word I was being promoted to content editor at Watchdog.org, which meant I was no longer tied to Missouri. With my wife nearly seven months pregnant, and a nephew on the way, too, in a few weeks it was an easy decision for the family to move back home.

We quickly found a rental, and moved into our new home on Saturday.

Unfortunately, things took a turn for the worse for me at Bovada and I busted the little roll I had on there, but not before netting a $1,500 profit on my initial investment. You may recall the phrase, “Nature abhors a vacuum.” I think that applies to online poker sites too – if the action is juicy, good players flock to it to fill the skill void.

That’s the same reason I believe there’s no such thing as “the best place to play $1/$2 NL in Vegas,” a very frequently asked questions on the poker forums.

I have some leads on some home games and association games in Cullman, so maybe I can play some underground poker as I did in Tuscaloosa, but I won’t bank on that just yet.

Another surprising development was a win by yours truly in the final freeroll of the Golden Nugget online series, which nets me a seat in the $600 Poker Player Newspaper event in Las Vegas on July 4, and two nights’ accommodation at the GN. You may recall (if I remembered to post it, perhaps not) I previously won one of their weekly events, which earned me a $125 seat plus a two-night stay.

Now comes the debate on whether to go. At least, with us back in Cullman, Amy has her support system nearby. If I go, it will be for the minimum two days so I can go play the $125 event on July 3, the $600 tournament on July 4 and fly back the 5th. As long as I can find flights for a decent price, it’s hard to pass up a free shot at some serious cash in the $600 tournament (I figure first in the July 3 event won’t be for more than a few thousand, but there could be tens of thousands to be won in the finale.)

I think I’d pledge any big winning towards the Disney Vacation Club. We had a blast on our trip with friends in October, and unlike almost all other time shares this seems like a decent deal.


As for St. Louis, it was a lot of fun living in the big city. There was a ton of stuff to see and do, and I didn’t check but maybe half of them off my list. I was pretty mopey as we packed up, but in the end it will be nice to have a great telecommute job and be able to live back home.
Posted by TuscaloosaJohnny at 9:40 AM 1 comment: