The World Poker Open at the Gold Strike in Tunica will never come close to reaching the status it once had. Consider these factors:

* When the WPO first started it was one of the few major events held each year. It was an event that everyone came to, even though back then the final was only a $5,000 buy-in (which returned to form this October). Now you have two $10K events a month, and considering that there is nothing to do in Tunica but play poker, this is not going to be a must see stop on the tournament trail.

* Up until this January, Harrah's had been running its WSOP Circuit in January almost concurrently with the WPO. I know many poker players liked having two options across town (across cotton patches might be a more apt description). If they didn't want to play the event that day at the Gold Strike they could go to the Grand Casino (now rebranded Harrah's) for a circuit event. Now with the WPO in October that advantage does not exist. It will be interesting to see the attendance numbers at the circuit event next January-February.

* The World Poker Tour cut the WPO from its schedule and the Gulf Coast Poker Championship at the Beau Rivage, the sister property of the Gold Strike, is the WPT stop in Mississippi in January. MGM Mirage's flagship tournament is now on the coast so if players are looking for the most action and chance for TV time the Beau is now the place to go.

Despite all of these factors turnout was still pretty good at the WPO this month. The schedule has been trimmed and most of the events have smaller buy-ins, which may actually appeal more to the more recreational tournament player near Tunica. The WPO is becoming more and more like other regional tournaments that don't attract the big shots of poker, but is the stomping grounds for the great Southern players like Timothy "T.K." Miles, Matt "Cub" Culberson and Tim Hebert.

Personally, I prefer to see a slate of $300 and $500 events rather than a bunch of $1,000 and $1,500 events. I can't afford to play the big ones, but I can buy into or satellite into the smaller events. This was a relatively short trip for me as I went Sunday through Friday of last week.

I stuck to satellites mostly as planned and did well cashing in 6 of 14. I like the format set up by Ken Lambert, who runs poker operations at both the Gold Strike and Beau Rivage for MGM Mirage. The $125 buy-in sats have two winners with each receiving 5 $100 buy-in chips and $50 cash. I like having two equal winners rather than one person receiving all of the dough (of course even one winner sats usually have a chop somewhere in there) since you never feel to far out of it as long as you have chips. I think my profit in the sats was a little over $1,000. Unfortunately, I didn't do well otherwise and left Tunica with about a $400 profit. The bright moment was the trip was cashing in the $300 Omaha Hi-Lo tournament. My 16th place finish was a bit disappointing, however, since when we got into the money with 18 players I had about an average stack but couldn't win a hand the rest of the way.
Posted by TuscaloosaJohnny at 11:23 AM 3 comments:

Trouble on The Plains

Not to gloat in Auburn's troubles, but things are really getting bad over there. For instance...

MacGyver was one of my favorite shows when I was a kid so when I ran across these videos online some time back I got a kick out of them. MacGyver: The College Years is a sporadic series of videos posted on YouTube paroding the international superspy and gadget master during his younger days at Phoenix University. The first one was posted in February 2007 and the fourth, and as of now last one, was posted this April. The videos are hit and miss, with a mix of funny moments and stupid ones. The second episode is my favorite (though I don't get the maniacal evil laughter at the end from our young anti-hero). Take a look for youselves:

Posted by TuscaloosaJohnny at 8:25 AM No comments: 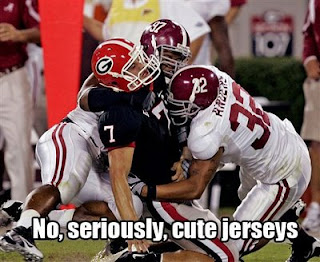 Perhaps it's a bit late to be gloating over the Georgia win (especially after the mediocre performance against Kentucky this past Saturday), but I haven't posted in a couple of weeks so now is my time to brag on the 'Bama boys.

Are we back? Time will tell, but 6-0 is a heck of a way to start the season. One might argue our only true test so far has been Georgia, but with Tennessee and Auburn looking very weak at this point in the season we could be 12-0 and headed to the SEC Championship game if we can win in Baton Rogue. Fingers firmly crossed.

As for me, I did not get that job at the university I was hopeful about so I'm still on the hunt. Since I'm likely to still lack full-time employment later this month I plan to head to Tunica for the World Poker Open for a week. This event may not quite be as lustrious as it used to be (no longer a WPT event, dumped to a new month to get it out of the way of the Beau's WPT event in January), but it's still where I cut my poker tournament teeth, so to speak. I'll be up there with Rounder mag, pressing flesh and playing some poker. The poker playing has been very mediocre for me lately so perhaps the change of scenery will yield a change in luck.
Posted by TuscaloosaJohnny at 7:55 AM 1 comment: