Of Bond, hobbits and poker

If you haven't seen Skyfall proceed directly to the theater. Even if you don't like James Bond movies I think you'd enjoy this one. I'm a big Bond nut so as you can guess I thoroughly enjoyed Skyfall.
I'm looking forward to The Hobbit, which I'll probably go see over Christmas break. The Lord of the Rings trilogy was a delight, I think in part for the New Zealand landscape as much as anything else. I'd love to one day visit New Zealand or Australia, but that's no cheap plane ticket.

I haven't played poker in two months -- I mean ANY. Sometimes it's nice to take that break. My new full-time job (check out Missouri Watchdog here) has kept me plenty busy, and our nationwide network just met at the Ritz-Carlton in Amelia Island, Florida, for a conference and a little R&R. It's not a bad gig, believe me, and I get the entire week off between Christmas and New Year's.

I'm getting back on that poker horse this Friday, with a visit to St. Charles, where Harrah's completed its sale to Hollywood. I doubt much has changed over there but the signage. The poker room seems to be running as it was before, from what I hear. Hopefully, I can get done with work early enough to hit the $5-$10 w/ FK Omaha/8 game at Ameristar. It's truly one of the easiest games in the area.
I'm also planning a Tunica trip this January to finally go play in the World Series of Poker Circuit event again. It's been about five years since I've been to Harrah's (it was still the Grand Casino at the time) and I still possess a $100 tournament buy-in chip. Thankfully, those don't have a date on them and they've used the same ones perpetually.
If I'm feeling frisky I might dabble in some casino games, perhaps some leisurely roulette. A good source for information on the game is at onlineroulette.org. I believe that Bond played some roulette in Skyfall, which might be a first for 007 in the series.
I'd love to make a return trip to Las Vegas for a brief time this summer, but we'll just have to wait and see on that one. Family vacations come first. John Harper, who turns 3 on Dec. 8, had a blast at Disney World last month and I can't wait to figure out another cool place to take him -- Las Vegas is not one! 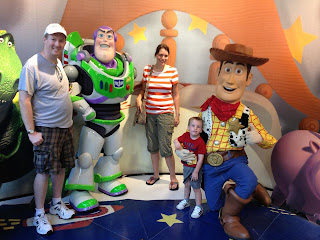 Woody, Buzz, Andy, Jesse and Mr. Potato Head. You guess which is which!
Posted by TuscaloosaJohnny at 2:39 PM 4 comments: