I started writing this post shortly after the Vegas trip and got sidetracked, and put it off, and well...finally I am not completing it nearly a month later. Here it is:

I'm back from my five-day trip to Vegas with a little money in my pocket. Nothing like the cash I've managed to win on WPEX lately, but it did pay for the trip at least...and lest we forget it was NOT a vacation and WAS a business trip. But yes, I had plenty of fun. It is Vegas, after all. 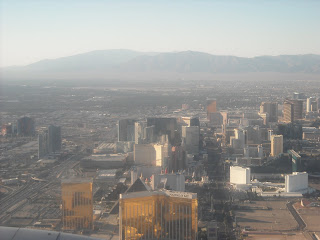 In addition to networking, one of main goals was to hit every poker room on the Strip that I did not make it to last summer. This was to make notes on each one for my website project. This meant that in addition to checking out the WSOP and playing some cash games in glorious poker rooms like Venetian and Bellagio I would also be slumming it in Hooters, Riviera, Circus Circus and the like.

One thing I've discovered in trekking around Strip poker rooms is that many of the smaller rooms are struggling big time. If not for little morning tournaments that tend to draw in the neighborhood of 15-25 players these rooms wouldn't have a poker game going at all before late afternoon. Even then, most of the small rooms are lucky to get one 1-2 NL game going. I'm not sure any games run at all at Hooters except for weekends. The casino is running a promotion where a player who sits in a cash game for 20 hours during the week gets $300...AND THE ROOM WAS STILL EMPTY!

This was to be another trip on the cheap so we ended up staying a couple of nights at the El Cortez and a couple at Golden Nugget. (GN is a nice hotel for the price, though, with accommodation rivaling those of good Strip rooms for a much lower price...in all of those Vegas articles I wrote for USA Today Travel Tips I mentioned this frequently.) I like to joke about the ol' El Cortez, but I had heard the rooms were actually pretty good. I would say I was a bit disappointed in the furnishings (older), but happily surprised with the size of the room (large).

Brian and I played the evening deep stack tournament at the WSOP as I knew this would be one of my few (if only) chances on the trip to play a lengthy tournament. I lasted awhile, doubling early when I flopped a nut straight and a woman pushed all in against me with the bottom end of a four-card straight on the turn drawing dead to a chop. I busted with AT on a ten high flop against slow played jacks when he called preflop and check raise shoved the flop.

We checked out the stage for the featured table. It's by far the coolest setup yet: 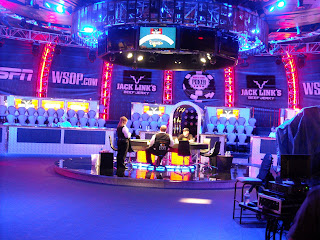 We spent a couple of days hitting Strip rooms pretty hard, and playing lots of 1-2 NL. Of course, we had to stop in to places like Venetian, Aria and Bellagio although I had already taken notes for my research. Don't worry. These rooms are still kicking!

I met up with Jim Anderson, a former regular on RGP, to finally cash in on an unpaid gambling debt. Since our alma maters, Alabama and Texas Tech, played in the 2006 Cotton Bowl we decided to wager a Vegas dinner on the outcome. Bama squeaked by on the fugliest game winning field goal in history. Although both Jim and I have spent considerable time in Vegas in the ensuing five years, this was the first time we were able to connect.

Jim, my traveling companion Brian and I had dinner at the Peppermill, a Vegas institution at which I had yet to eat. Just as its Reno casino counterpart, this local eatery features low lighting and plenty of neon. The three of us played the late tournament at Binion's that night with no luck. I must say that place continues to sadly go downhill. The tournament itself drew about 15 players (they used to get maybe 10 tables) and the former poker room was converted to a bingo hall...which I don't think is even in use anymore.

On this trip Brian and I did perhaps the coolest thing I can recall doing in Vegas (other than, you know, playing in the WSOP ME). You probably are aware that Sahara closed in the spring. We were able to visit during the last days of the liquidation sale inside the property. Where slots once stood on the casino floor was rows and rows of lamps, desks and other assorted junk. A craps table could be had for several thousand.

We weren't so much interested in buying goods as we were in wondering around the property. Talk about access! We went back through the restaurants and kitchens, cashiers cage and coin sorting room and up to the top floor to visit the penthouse suites. We roamed through space that untold celebrities and big shots once stayed. Here are some photos from the excursion: 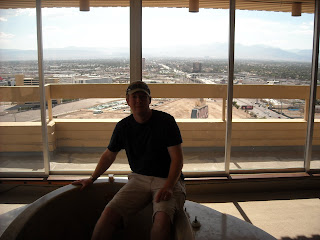 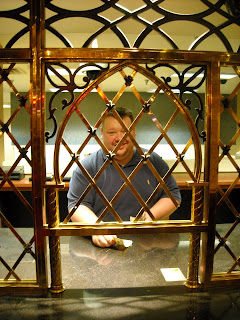 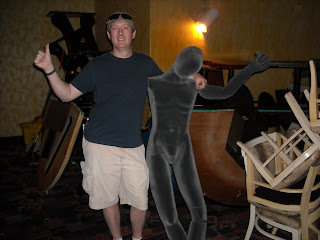 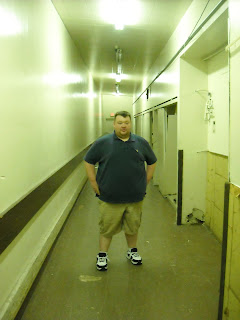 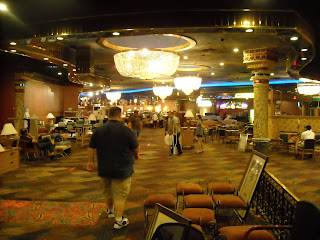 We checked out the Cosmo one day. Nice place, and you get $10 in free slot play when you sign up for their player's club card. My advice on free slot play is to use it on video poker, where you are likely to recoup most of the free play amount and if you get lucky to hit a royal, straight flush or quads might just make some decent cash.

Overall, I made about enough to pay for the trip so let's call if a freeroll. :)
Posted by TuscaloosaJohnny at 5:14 PM 1 comment: