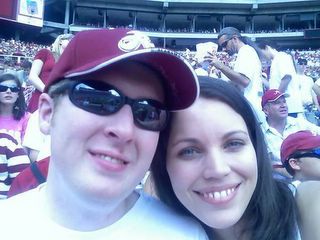 Amy and me at a Bama football game this fall. I can't wait to marry her!

I didn't realize how much I missed the poker circuit in the five months I've been away. If you truly love this game as I do, you can't beat the excitement of lining up to enter a tournament with a shot at $100K or entering a satellite for a chance of entering a big tournament or sitting down in one of the plethora of available cash games or seeing old friends you've met along the tournament trail.

It's great to be back.

I have no success to report...sat down in a 2-5 NL game as soon as I got to the Gold Strike and picked up kings vs. aces and got it all in preflop. Damn, I had serious WSOP flashbacks with that hand. I've been running uphill since. (Don't worry Amy. I haven't lost my ass...yet.)

Sadly, this stay will be brief as I have to go back to school on the 11th. I also miss Amy like crazy. :) Perhaps I can make it back for a weekend before it's all over.

Wonder why I never gave that one-year wrap up report? I felt as if I needed this grandiose concluding post and I never took the time to do it. There was school and there was Amy, and yes, some poker too (though much less poker than in the preceeding months.) If you have read this blog from the beginning, or taken the time to go back and read my first post in October 2004, you will see that the whole creation of this blog was based on my preparation for my one-year journey into the poker world. Now that's over, so this blog must evolve to continue. As I get back to writing it, I'll probably delve into plenty of non-poker topics, but there will be a review of the best of the year as well. I'm trying to think what my Top 10 moments were, for instance...
Posted by TuscaloosaJohnny at 12:39 PM No comments:

Of love and poker

Didn't you always hate those season-ending cliffhangers on television? Just when things get interesting and the suspense builds the series goes on hiatus for the summer and you are left wondering for months how the writers are going to continue the plotlines. The worst thing is when a series is abruptly canceled after the season ender is filmed and fans are left forever puzzled. I still wonder what would have happened to FBI Agent Dale Cooper on Twin Peaks after he was inhabitated by the spirit BOB. I guess we'll never know.

Consider the last four months my season-ending cliffhanger. For the two of you still reading, thank you for your patronage (however foolish it may be, I love you for still stopping by from time to time to see if I have come out of the cave.) I think Iggy summed it up best when he posted in the comment section, "Damn it Johnny, where
are you?"

I just recently concluded the best year of my life. I completed a year (actually a year and a half now) of professional poker playing without going broke and enjoyed the freedoms that such an endeavor tends to bring. No alarm clock. No boss. It's great. I won a seat into and cashed in the main event of the World Series of Poker, and will have the accompanying stories to tell my grandkids one day. I turned 30 and it brought me a renewed vigor and focus on doing something with the rest of my life. But you are probably more interested in what's been going on in the months since my last post. That is the best part...

You may recall the girl I went home to, the main reason I wanted to leave Vegas a week early. Her name is Amy and we're getting married Sept. 22. Wow, how quickly I fell in love. We hit it off as soon as I got home and it has been a joyous whirlwhind of the last four months. I proposed just before Christmas and at that point there was no doubt here answer would be "yes." I'm ready to be a family man.

I've also been in grad school since August, with students my brother's age who really make me feel old. When you're dealing with people who barely know who Ross Perot is, as one class discussion revealed, you are going to feel a tad geriatric. I'm halfway done with that program and will get my master's in marketing in May. After that, it's back to the real world I'm afraid, but what a two years of freedom it will have been.

If you're reading, feel free to pass the word that I'm back. Tuscaloosa Johnny blogs again! Now, I must get on my horse and ride to Tunica...I got a week before school starts back. Yee haw! 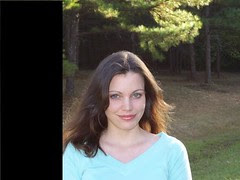 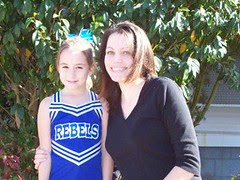 Posted by TuscaloosaJohnny at 12:29 PM 4 comments: