Can you believe it? Here I come: 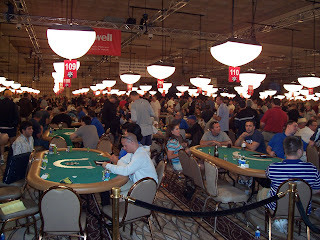 For the third consecutive year I said I wasn't going to make it, yet my airline reservation says leaving Birmingham on June 30 and returning from Las Vegas on July 7. I promise to stop saying "this is the summer I don't make it to the WSOP." While I still can't divluge too much about my new project it will have me hitting the ground running when I touch down at McCarran. We should have a site up and running in the next week and then I will kindly ask you to help me promote the heck out of it.
Posted by TuscaloosaJohnny at 5:44 AM 1 comment:

John Harper's "Half" B'day, Plus Big News on the Horizon 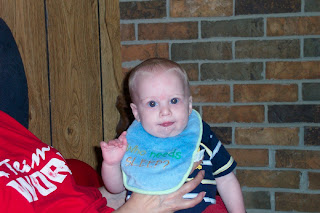 John Harper waves to the camera as he celebrates another day of wonderful life. Man, I love having a son. It was hard to adjust to this big change in our lives at first, but I think we've hit a groove -- and John Harper just hit six months, at already nearly 18 lbs. and 27 inches. The kid's going to be a linebacker!

Life is good on the homefront, and things are also improving professionally. I had been considering contacting a certain book publisher on the casino industry for more than a year and finally stopped procrastinating last week. Quickly, the ball has started rolling not on any book deals, but on some poker blogging for a major website. Perhaps not just a blog, but an entire new poker section wholly created by me. I have a conference call about this endeavor Tuesday morning and should have some big news soon.
Posted by TuscaloosaJohnny at 4:51 PM No comments:

Since I will not be making my annual trek to poker la-la-land this summer I am admiring the WSOP from afar. I've been playing the Full Tilt Poker Fantasy Poker game for the first time this year and am in the Poker from the Rail group. I thought I had some good picks to start, but so far my team(s) have sucked as I'm only 12th in the group and 4,000 something overall on FTP. I can't believe that many people actually take the time to pick a team. I always thought much of the poker coverage, with excited talk and hype about particular players, was pointless. (Of particular amusement is the pick the finishers of the WPT final table segment on PokerRoad Radio.) Personally, I couldn't care less about individual tournament players. For me, it's always about the game. It seems there are plenty of poker fans out there who DO care about the players and follow them as if they would Kobe, Tiger or Manning.

My pal Brian is headed out to Vegas on Monday for four days and plans to hit the poker scene. We were talking the other day about how he should plan his attack with $1,000 in his pocket. That sparked inspriation for an article I wrote on what to do in Vegas if your poker bankroll is $1,000, $5,000 or $20,000...I sent it to Al for Poker from the Rail so hopefully he runs it. I've sent him several items in the past few weeks, including the timely "Best Players Never to Have Won a Bracelet" article, which featured Michael Mizrachi, who won the $50K the next day.

Even if I can't experience the WSOP first hand this year I can make a little coin in writing about it from the comfort of my Tuscaloosa, Alabama, office. I'm still settling in from the Nicaragua trip and trying to get caught up on things. My office (and house) is so disorganized and cluttered I don't know how I ever get anything done here. I should post some photos on here and you can SEE what I am talking about.

I've been thinking about next year and I've set a goal. Obviously, I would like to return to Vegas in 2011 when John Harper is a year older and perhaps I can get away for a few days. Those month long trips are a thing of the past, but short stays may be feasible. I'm going to start putting money made from ads on this blog toward poker trips such as the WSOP. Hopefully, if I am able to block out some time next summer I will either win money for the trip in BBT6 (fingers crossed that it returns, but I suspect it will) or raise enough on here to fund the getaway.

Until then I'll keep picking fantasy players...
Posted by TuscaloosaJohnny at 11:05 AM No comments: