The longtime television producer, perhaps best known as co-creating “The Simpsons,” continues to fight terminal colon cancer, after being given a diagnosis of only six months to live late last year.

The 58-year-old gave Hollywood Reporter details on how he’s giving away his huge fortune before he passes away.

“I have more money than I’m interested in spending,” he said. “Everyone in my family is taken care of. And I enjoy this.” 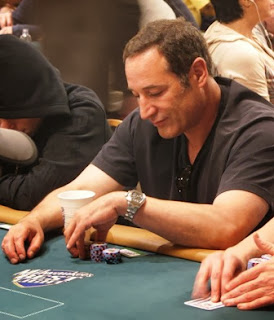 Much of the money has gone to Save the Children, PETA and his own foundation, which benefits hungry people and dogs in need of rescue.

Of course, we know him in the poker world as one of our own, as he’s been a mainstay at the World Series of Poker for a number of years.

Little did I realize, before doing some Hendon Mob research, that Simon has played tournament poker for two decades. His first listed cash is a victory in a $100 Seven Card Stud event at the 1995 Big Poker Oktober.

I’ve never spoken to Simon, but I semi-railed him as the players at the 2007 WSOP main event made it close to the cash. I was getting some color for a PokerWorks blog post that day, floating around the Amazon room at the Rio.

As any of you who have witnessed that period during the main event knows, it’s a heady, nervous time, as players on the bubble try to creep into the money. There’s a massive difference for most players between going home with zero and about $20,000.

As I watched, none other than fellow WSOP mainstay Norm McDonald was standing on Simon’s rail, the poker player celebrity club rooting for each other. I chatted some with McDonald (I had met him at the previous WSOP) as he followed his friend, who would occasionally walk over to talk to the comedian.

It’s not like he needed the cash. He had his hands on “Taxi” and “Cheers,” among other television classics. The man is worth a mint.

It’s a pleasure to see a man in Simon’s position be as philanthropic with his money as he has been, and I for one will pray that he can beat this cancer and sit at the green felt at the WSOP once again.

Posted by TuscaloosaJohnny at 10:52 AM No comments: