Al pointed this out in an email, and it's a good point, is if you can get into the TOC of BBT5 there will be a MAXIMUM of 24 players in the final since there are only three tournaments a week for six weeks with a total of four qualifiers from these weekly events. If we have a repeat winner (or top two finisher in the invitational) that will reduce the total number in the TOC by one each time it occurs.

Assuming 24 players in the TOC and all things being equal, a player will have a 1 in 8 chance at a main event seat and a better than 1 in 5 chance of winning one of the prizes. With $34,000 in prizes up for grabs in the TOC each player's equity in this tournament will be $1,416.66...and this is on a freeroll! That's quite a bit better than in the past two BBTs in which the final contained two main event seats and a couple of bracelet race packages. With about 45 players in the final the average equity was around $500.

As a guy who enjoys competition, but has little athletic ability, I live for the BBT. I'll miss the point system and the monthly races because it was a great yardstick and challenge, but the trade off is well worth it for the increased TOC equity, more prizes and many fewer mathematical headaches for Al!

At the very least the return of the BBT should get us all blogging more often, as I see I am far from the only one who has been lax on his posts in the past year...
Posted by TuscaloosaJohnny at 3:05 PM 3 comments:

The deets of BBT5 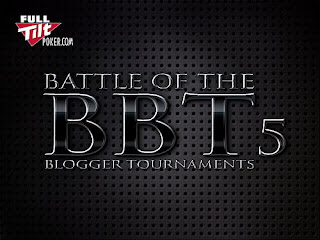 If you haven't read it on Poker from the Rail yet, here is the scoop on BBT5.

Leave it to the amazing Allen Rash to hook us up with lots of free goodies -- $50,000 in all, including three main event seats, three $2,000 bracelet race packages and $14,000 in freeroll money. For the rest of you fortunate enough to receive invitations to the Sunday tourneys I will see you there!
Posted by TuscaloosaJohnny at 8:50 AM No comments: 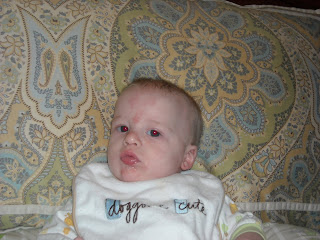 Well, he and we survived four months. Little guy turned four months old yesterday and celebrated with congestion and diarrhea. He hasn't felt well this week.

Amy fed him rice cereal from a spoon Thursday -- the first semi-solid food for him. He liked it when the spoon was in his mouth, and cried when it wasn't. Surely, it's not as satisfying as the constant flow from a nipple.

Meant to post this when I sent it to Al at Poker From the Rail, but here is the link finally. I had the opportunity to do a phone interview with Amir Vahedi only a couple of months before his passing. It shows how out of touch with poker I was that I did not learn of his death until weeks after it occurred. The interview was for an issue or Rounder that never published. I thought Al might like it as a tribute to the gregarious Vahedi and he ran it here.

I just heard that Al posted via Twitter that there's a BBT5 in the works with $40,000 in free stuff. This comes as a pleasant surprise, and I can't wait to hear the details. I'm really curious what the prizes will be, as I have to assume they will not be WSOP related since the thing would probably not start before May. FTOPS or WPT entries perhaps? I was looking back at BBT4 and I believe the total prizes were about $30,000 (two main event entries, four $2K packages and about $2,000-$2,500 to the overall leadrboard plus jerseys) so this looks to be the biggest BBT yet!
Posted by TuscaloosaJohnny at 1:29 PM 1 comment: