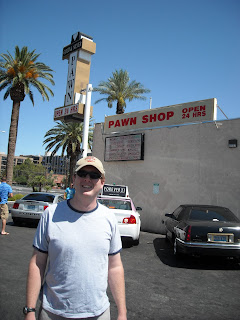 Long time, no see. I realized the other day I haven't posted since before I left for Vegas. The truth is I've taken a hiatus from poker playing, and haven't done much of any poker writing in the last few months. These are the things that usually spur me to update this blog and help explain my prolonged absence.

I had a rare losing stretch in Vegas. For whatever reason I tend to fare well when I visit Sin City, but it wasn't to be on this trip. I didn't get crushed by any means -- I was only there a week -- but I just couldn't seem to win at tournaments or cash games. The main reason I traveled there was for research on a new website project that has yet to come to fruition and seems to have stalled to my frustration. That big news I promised before is not yet official, but we will see.

I actually did pretty good on FTP the latter half of July, between teaching a summer journalism course at a local middle school and working on articles for the fall issue of my Alabama football magazine. After that I hit a rough stretch in August and have played very little poker in the last six weeks. While I am still well ahead for the year, my streak of multiple $10,000 or more poker wins in a calendar year is in danger of ending in 2010.

Considering I have taken close to three months off from poker so far this year that really shouldn't be that much of a surprise, and maybe it's a good thing to take extended breaks as I often feel I can make more money per hour doing other things. Plus, breaks can make me feel renewed and rejuvenated when I come back full force. When I gave up poker for Lent (or at least part of it!) in the spring I bounced back from the break by winning about $3,000 in two weeks.

Here in Tuscaloosa the heat finally broke and we are no longer dealing with highs in the 90s everyday. The Tide pulled out a heart-attack inducing game at Arkansas this past weekend and has a big rematch against Florida this Saturday. As usual, I've been doing stats work for networks and will be working for CBS up in the press box at Bryant-Denny this weekend. I'll also be selling copies of Crimson magazine outside the stadium for most of the rest of the day. Busy times, but good and profitable times.

Aria -- The casino between Bellagio and Monte Carlo (and also owned by MGM Mirage) opened last December to rave reviews. Now I know why. This place is a great addition to the Strip. The poker room is instantly one of my favorites and offers a great game selection. Poker room manager Adam Altweis is trying to attract some of the high-roller crowd with the one-table Ivey room. I believe a $100-$200 PLO game was taking place one of the times I was in there. I interviewed Adam for my website project and he was very generous with the comps for myself and the friends with whom I was traveling. Aria hosted a summer tournament series concurrent with the WSOP, but the numbers were low. The convention area at which the events took place were spacious and inviting. I played one of their nightly tournaments and the structure was great. In about a 90-player field I played for seven hours and finished 9th.

WSOP -- Criticize the WSOP brass all you want, but they try to make improvements every year. I was impressed that they managed to secure all of the Rio convention space for the WSOP, which allowed for all of the tournament, cash game, satellite action you could stand. I thought the addition of a $200 daily deep-stack tournament in the afternoons was a smart move to steal back some of the poker traffic headed for The Venetian, but I heard the structure was a bit too good and I didn't enter one of these because I didn't want to play until 4 a.m. just to make the final table. 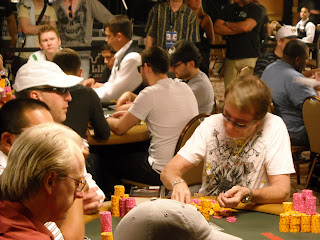 Binion's -- My old stomping grounds continues to go downhill. As you probably know already, the hotel is closed and my beloved coffee shop was also shut down. Cash games have almost dried up and the Binion's Poker Open events attracted smaller fields than ever before. CK and I played a O8 tourney down there that drew less than 100 players. My Oregon pal Ted had to move over to the Four Queens this year for his usual extended WSOP stay. I managed to visit with him just before I left so it was good to catch up. You could say that poker on Fremont Street in general is a down. There's just not a lot of action here anymore.

Harrah's greed -- While the WSOP has seen improvements in service, it grows ever stronger as a money pit for poker players. Prices at the Poker Kitchen continue to rise. Rake was taken in cash games without a flop. Etc., etc., etc.
Posted by TuscaloosaJohnny at 10:21 AM No comments: