Packing up the BBT

Congrats to the BBT winners last night. I recall seeing jjok and NYRambler (who I have marked in red on my FTP program, meaning I think he's a tough player) as two of the main event winners. Don't know if they plan to actually play the WSOP, but very good luck to them and the other winners (sorry, forgot the rest).

I pretty much packed it in after Sunday. I just returned from Nicaragua and took my shot at the last Sunday freeroll and almost earned my TOC seat. I made only my second final table of the series and busted in sixth when all in with JJ against AK and KQ. I was good to triple until a king smacked the table on the river. After that I decided I didn't want to stay up late on Monday or Wednesday after coming home exhausted from the mission trip. Plus, I needed to spend some quality time with the family after being gone for more than a week.

In years past I was obviously actively involved in the BBT, posting frequently about it on the blog and having better than expected success. This year, I only played about half the events of these poker tournaments. Funny how life changes such as babies being born and mission trips alter your world. It's not that I don't love the BBT and want to participate; it's just that there are other priorities that prevent full attention to this.

I'll try to actually write a trip report of some kind this year. Our church was able to raise enough money to build FOUR houses in the Chacasecra community of Nicaragua this year instead of the lone house we paid for in years past. Our team worked on one house together (oddly located between a bar and a cockfighting ring!) while visiting the other building sites a couple of times.

This week I've been trying to catch up with work after being out a week, shipping some WSOP preview articles to Al for Poker from the Rail, doing some of my online writing work and playing poker online.

Here's a pic from in front of Lake Managua: 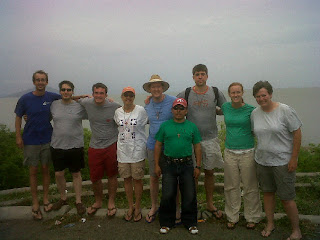 That's me in the big hat.
Posted by TuscaloosaJohnny at 2:54 PM No comments:

Stinkin' Up the BBT

Two weeks of BBT5 have come and gone and the best I have to show for my efforts is one 15th place finish. I've either caught no cards, played bad by bluffing off my stack, or took bad beats in each event. But that's tournament poker, isn't it? At least the middle item can be prevented by not playing like a donk.

It's going to be a crapshoot to get into the TOC for any of us due to limited amount of tournaments available. I am glad to see that more people are getting into the Sunday invitational that want in it. When I saw that the field was initially limited to 50 and excluded many regular BBT players I figured there would be a big fuss. I didn't see the fuss, but I see that the field size has more than doubled. Good call by Al and the FTP folks. Of course, that 1 in 25 shot at getting to the TOC from the Sunday event has disappeared now, but the move was just.

When BBT5 started I figured I had about a 50-60 percent shot of qualifying for the TOC. Now, I'd say it's more like 10-20 percent. Field sizes have grown, my tournament game is apparently rusty and I will miss a week while gone to Nicaragua. Hard to believe I leave in less than two weeks.

While I am sure that many are glad the old BBT system is gone, I miss the three months and point system league because I think it suits me better. As was evidenced by my results, my saving grace was consistency. In the six months of BBT3 and BBT4 I finished 1st, 16th, 1st, 12th, 1st and 3rd during the six months of competition. I believe the point system made me play more disciplined. My first goal was to try to make the top 25 percent to earn points and then go for the win. The method seemed to work well for me. Thinking back to casino poker tournaments I've won I can hardly recall one I led wire to wire. I think any I won or chopped I just hung around and then caught fire when the blinds rose and it got to shove in time. The same seems to be true ot BBT tournies.

I think I am also hurt by the lack of "skillz" in this BBT. The mixed games in the Skillz tournament suited me. I may not even have an edge against the average field in BBT in NLHE events, but I believe my edge in the rarely played other poker games was quite strong. I won five events in BBT3 and BBT4 and I believe three of them were in non-NLHE games.

So it appears barring some miracle win I will, as expected, not head to Vegas this summer. I'll live vicariously through other bloggers and poker writers. No biggie. A guy needs a break from the madness every once in a while, and I would miss the dickens out of my little one if I was in Nevada. Going to Nicaragua and leaving my family behind will be hard enough. I'll probably be back for WSOP 2011 though.

To be honest, I'm ready for some football. Bama just had its spring scrimmage known as A-Day and my mag Crimson just came out with the spring issue. I might have to look for some NCAA football tickets too and hit up some Bama road games this year.
Posted by TuscaloosaJohnny at 8:54 AM 2 comments: